The Geography and Gender Research Group of the Universitat Autònoma de Barcelona (UAB) hosted the International Conference on Feminist Geographies and Intersectionality: Places, Identities and Knowledges, the Commission on Gender and Geography International pre-Conference for the 33rd International Geographical Union Congress (Beijing, August 2016). There was a three-day Conference that sought to host researchers working with gender as well as other identities that play a role in the experience of place: age, social class, ethnicity, sexuality, ability. The Conference brought together 76 participants from 21 countries (United States, United Kingdom, France, Israel, Argentina, Brazil, Turkey, Germany, Singapore, Canada, Sweden, The Netherlands, Belgium, New Zeeland, Iceland, Czech Republic, India, Portugal, Italy, Greece and Spain) and was organised through three keynote lectures, twelve sessions of paper presentations, one panel and one walking tour through the old city of Barcelona.

Dr. Joos Drooglever Fortuijn (University of Amsterdam) was the first keynote speaker talking about Gender and Intersectionality in geography teaching, underlying the reasons why intersectionality matters in any learning environment and how engages with feminist pedagogy. Dr. Hanna Hamdam Saliba (Urban and Regional Planner, Palestine/Israel), focused on the everyday spatial experiences, practices and behaviours of Arab women in Barcelona and Jaffa/Tel Aviv and how these women cope with various power structures which influence their spatial practices in the urban spaces. Dr. Margarida Queirós do Vale (University of Lisbon) talked about Gendering smart cities: Time-spaces and places for feminism, the main issue of a broader project that use innovative methodology to gather socio-economic information of men and women’s daily uses of space and time.

Under the umbrella of Feminist Geographies and Intersectionality, participants sent abstracts that referred globally to 12 themes: Teaching and learning, Activism, Intersectional theory, Sexualities, Work and gender contract, Identities and representations, Planning and policies, Masculinities, Religions, Migrations, Methodologies and Mobilities. Such issues showed the main concerns covered by these scholars and also reflected what is less considered. Sexualities, Masculinities, Representations and Activism (in a broad sense -human rights, citizenship, environmental justice, right to housing…- but closely connected to sexualities and queer politics), seemed to be the clearer response to our call. However, prevalent material issues such as work, planning, migrations and mobilites were very present as well. We especially sought for sessions on theory and methodology for their learning potential and we appreciated papers that dealt with less studied power structures from a feminist geography standpoint such as religion. Some papers considered transversally other identities such as ethnicity, class, age or nationality, and others, such as ability, were absent. Some papers addressed their themes from the mutual constitution of categories; others referred specifically to one or more categories. Even so, intersectionality was, undoubtedly, the main thread of the Conference and was at the core of the discussions.

Dr. Toni Luna and Dr. Rosa Cerarols (Universitat Pompeu Fabra) guided the group to the old city of Barcelona. The itinerary was through the history of Barcelona from the Roman times to the industrial revolution with especial emphasis on the spaces and activities of women. We crossed the remains of the Roman City, the medieval expansions and the transformations in the old town with the industrial revolution and the nineteenth century enlargement plan.

The Conference at the UAB permitted to celebrate an Open business meeting of the Commission on Gender and Geography of the International Geographical Union. There were about 25 attendants including some past, present and future members of the steering committee plus some interested new young scholars. The chair, Dr. Shirlena Huang (National University of Singapore) emphasized the launch of the Young and Emerging Scholars (YES!), an initiative to create a platform for the networking and mentoring of early career feminist geographers. YES! is currently collectively organized by Dr. Kamalini Ramdas (National University of Singapore), Dr. Milena Janiec (University of South Florida, Tampa) and Dr. Caroline Faria (University of Texas, Austin).

The organizing committee of the UAB Conference expressed its gratitude to all the delegates for their rich and stimulating participation and debate and for their generous collaboration. The senior group of organizers thanked the work, availability and illusion of the younger members during the time spent in the preparation of the Conference. 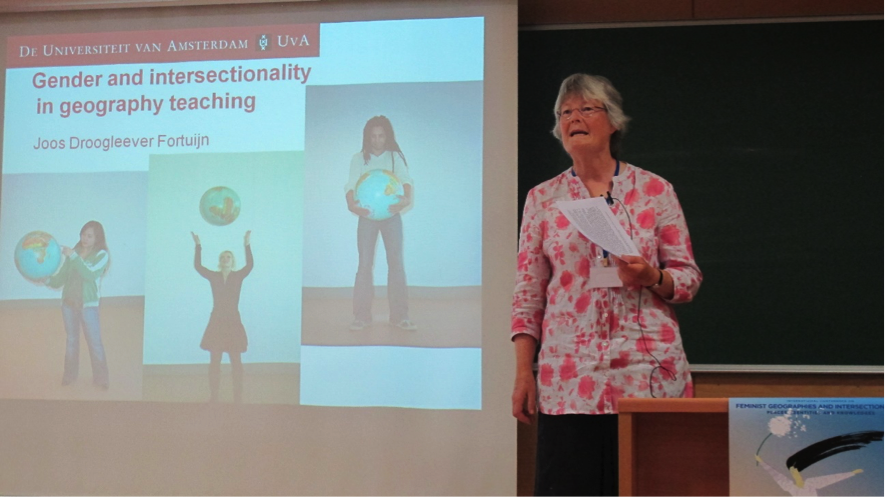