Interfase-UAB, inside the ETC/ACM consortium, is responsible for the provision of support to EEA, the Member States and the EEA member countries on the environmental noise field: mainly supporting the collection and quality checking of noise data, assessing it and disseminating the main figures at European and country level.

The Environmental Noise Directive (END) entered into force in 2002, and based on the information compiled since that date, the first noise assessment report at EU level was developed and published together with the EEA, in December 2014.

The report contains already nearly two data reporting rounds of noise information, highlighting the noise sources areas where the END is of application and strategic noise maps and noise action plans being developed in those areas by the EEA member countries. The report focuses its assessment on the second reporting round (2010-2012), although some hints are also provided concerning the first reporting round (2005-2007-2009).

Some of the key messages that can be encountered in this first assessment are: 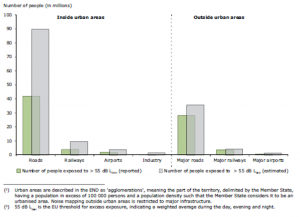 You can download the full report in the following link: http://www.eea.europa.eu/publications/noise-in-europe-2014

But the collection of the noise information under the END premises is a continuous exercise. Member States, obliged to report mandatory dataflows every five years, can update the information reported at any time in between, which implies that the EEA and the UAB (under the ETC/ACM) are updating the noise database and disseminating the information on a yearly basis. 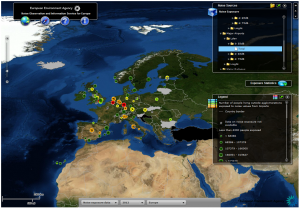 The information received concerning noise strategic maps is used to conform the noise indicator published yearly by the European Environment Agency, last one focused specifically on exposure to and annoyance by traffic noise: http://www.eea.europa.eu/data-and-maps/indicators/exposure-to-and-annoyance-by-1/assessment

Assessment exercises being developed at the moment go a bit further on some of the key messages highlighted in the Noise in Europe 2014 report and previous EEA and Expert Panel on Noise (EPoN) publications.

An improvement of the methodology being described in the Good practice guide on quiet areas, Technical Report 4/2014 (http://www.eea.europa.eu/publications/good-practice-guide-on-quiet-areas), is being proposed through an improved Quietness Suitability Index (QSI).

The distribution of those quiet areas outside urban areas has been seen as strongly related to population density, so a key factor when planning those areas are their accessibility and the degree of protection that already have, both aspects analysed in this assessment. 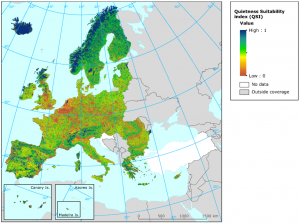